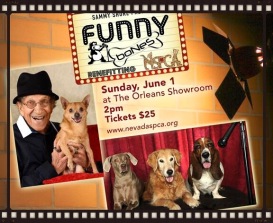 Sammy Shore’s Funny Bones live comedy show features world-famous comedians and up-and-coming comedic talents joining together for a hilarious afternoon of laughs and entertainment. The show is hosted by Sammy Shore, an American comedy legend who founded The Comedy Store on the Sunset Strip, California and was hand-picked by Colonel Parker to be Elvis’ opening act during the Kings Famous 1969-1972 “Comeback Tour” in Las Vegas. In prior Funny Bones shows, many nationally and internationally known comedians have participated, including, Pauly Shore, Bobby Slayton, George Wallace, Louie Anderson and Hal Sparks. Philip Matthews is the show’s director.

A special thanks to the Orleans Showroom, 3 Lions Tattoo, Hounds for Hope and The Tail Waggers Club. 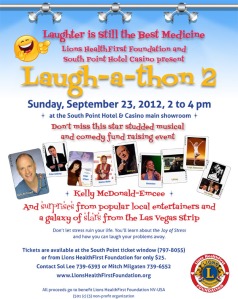 I am excited to announce that I, along with Shades of Sinatra, will be performing THIS weekend at a very special musical-comedy benefit taking place at the South Point Hotel & Casino, located at 9777 South Las Vegas Blvd. The show will take place this Sunday, Sept. 23rd, at 2:00pm, with doors opening at 1:30 p.m.

Organized by the Lions HealthFirst Foundation, in cooperation with the South Point Hotel & Casino who donated the showroom, tickets are now on sale at the showroom Box office, with all seats one price, $25.00. Proceeds will go directly into the Foundation’s Ultrasound Health Screening program.

“Because of fund-raising activities such as this event, the ultrasound exams are free, or at a very low cost to patients who can afford to share in the cost,” James Bartel, president of the Foundation, said. “The exams pick up potentially serious medical problems, such as masses, cysts, tumors, and blockages. Our screenings give you a heads up on what’s going on inside your body.” Bartel added. “They’re painless, non-invasive and only take about 60 minutes.”

The event will include music and comedy, as well as meeting and mingling with a host of celebrities and some of Las Vegas’ most prominent medical doctors. Among the entertainers performing are: Rich Little, Gordie Brown, Leigh Zimmerman and her daughter, Cayleigh Capaldi, Lisa Smith, Shades of Sinatra, Marlon Multo, Peter Anthony, Fielding West, Bill Fayne, Genevieve, Michelle Rohl, and Kelly McDonald, who will perform and host the afternoon. Emmy Award winner, Gary Anderson, has assembled a super trio as backup for the entertainers: Billy T. on piano, Steve Flora, bass, and Ryan Rose on drums. In addition to the trio, Anderson will add three horns, and will present his famous “Lighthouse Jazz Tribute.”

For more information and to secure your tickets in advance, call the Lions Health First Foundation, 739-6393…or you can purchase tickets online HERE. Additional information on the Foundation and its ultrasound screening program can be found on the Internet at www.lionshealthfirst.org. 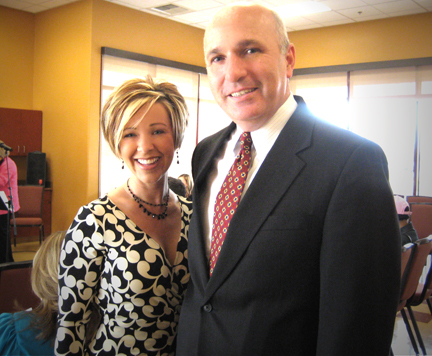 I recently had the privilege of singing at a campaign benefit concert for Ned Thomas (who is running for North Las Vegas Mayor in the upcoming election), where a portion of all proceeds were donated to “James Seastrand Helping Hands of NLV,” a local charity which serves the needs of our senior citizens. Now, those who know me well, know that I generally don’t get too involved in politics…however, in this case I do feel the need to write a bit about Ned Thomas and encourage you to consider him for your choice in the upcoming election (early voting starts THIS weekend…see below for schedule and locations).

My husband and I own a home here in North Las Vegas, and love the area…we plan to be here for many years to come.  While we’ve only been here for a little over 6 years, in that time we have already seen many changes in our growing community…some great, some not so good. Those who live here are familiar with what I mean.  So when we heard about Ned Thomas running for election, and began to read some of the things he stands for, and learned of some of his plans for the community should he be elected, we knew we needed to get involved.  He truly cares about the community of North Las Vegas…our home, and the home of our future children.

But instead of ME writing about what he believes, I will let you hear it directly from him, in HIS own words…from his own website.  Please take the time to read the following, and you will understand why I believe that Ned Thomas is the only choice for North Las Vegas Mayor. He’s a good man, and he’s an honest man…imagine THAT in a politician! :)

The current Mayoral election in North Las Vegas comes at a critical time in the continuing development of our community. Twelve years ago, when Mike Montandon was first elected Mayor, the City of North Las Vegas stood at the threshold of an era of unprecedented growth and development. Since the last census in 2000, we have added more than 125,000 new residents to our city. We have been recognized during most of the last decade as one of the fastest-growing cities in the country. We have added homes and neighborhoods, schools and shopping centers, parks and trails, and miles of new streets and infrastructure. The face of this City has changed dramatically in just a few short years, and we are still building. There is much left to be done.

The important question in this election is “What’s next?” How will we define ourselves and our community in a new era of slower growth and economic uncertainty? Looking around, it is obvious that we have already crossed the threshold into this new era. The evidence is all around us in the form of foreclosed homes, closed businesses and empty storefronts, unfinished streets and infrastructure. And this is not all! The economic uncertainty that swirls around us threatens the safety and security of our neighborhoods and the families and individuals who live in them. Just a few days ago, several schools in the vicinity of my son’s elementary school were placed in lockdown for several hours because gun shots were heard in the neighborhood. This is unacceptable under any circumstances. We need to feel safe in our homes.

This is a time for bold, new leadership in North Las Vegas. This is not a time for staying the course! This is not a time for more of the same at City Hall! The business model for local government that has served us so successfully in years past no longer applies because the circumstances around us have changed so dramatically. It’s as if the ground has shifted under our feet and we need to elect strong leadership with a commitment to broader thinking and higher ideals or we will not continue to progress.

I believe that my professional background and hands-on experience in local government clearly set me apart as your Best Choice for Mayor of North Las Vegas. I am a husband and a father of four small children. Within the next five years, all four children will be enrolled in the Clark County School District. I have a vested interest in the future of this community, and I am deeply concerned about the quality of our education system and the safety of our homes and neighborhoods.

I am an urban planner – one who has studied land-use planning and real estate economics and community development. I am a graduate of Harvard University and a former Fulbright Scholar, and I have a sincere desire to use my skills and hands-on experience for the betterment of our community. I am also a former member of the North Las Vegas Planning Commission, where I often had to make difficult decisions that would affect the lives and investments of others. This is not a duty that I took lightly.

Over the years, I have established a solid reputation at City Hall and elsewhere for working well with others to find common-sense solutions to our problems. I believe that the important issues we now face as a community demand that local government act wisely, think broadly, establish a clear vision for the future, and demonstrate a strong commitment to accountability and fiscal responsibility. Your support – and the support of your friends and family in the upcoming elections – would be very much appreciated.

If you live in North Las Vegas, I encourage you to get out there and vote this weekend (or anytime between March 21 – April 3)…make a difference for your community!

To find out more about Ned Thomas, and read more of his views and plans for North Las Vegas, please go to his official website at www.NedThomasForMayor.com